The price of Bitcoin (BTC) has increased by nearly 30% since late June, from $8,905 to just under $11,500 as of press time. Following the strong rally of the dominant cryptocurrency, three macro factors point at an optimistic medium-term trend. These macro factors hint at a positive medium-term to long-term price cycle but suggest that in the near term, momentum will fade and a consolidation phase will happen.

As Cathy Wood, CEO of Ark Invest, discussed on the In the Know podcast, there is technically little resistance between $13,000 and BTC’s all-time high of $20,000. Wood noted that BTC might see a new trading range between $10,000 and $13,000, which would establish a healthy consolidation phase:

Whether Bitcoin remains in the $10,000–$13,000 range for an extended period remains uncertain. In the past three years, BTC has tended to consolidate throughout September to October and rally during mid-November. Considering the activation of the block reward halving on May 11, the probability of an uptrend in November to December remains high.

A persistent narrative around the long-term prosperity of Bitcoin is the decline of the United States dollar. In recent months, primarily due to the pandemic and the U.S. economy struggling to reopen, the dollar’s value has fallen against other reserve currencies.

On July 31, Lee Hardman, currency analyst at Mitsubishi UFJ Financial Group, said the sell-off of the dollar was “relentless.” According to Supriya Menon, multiasset strategist at Pictet Asset Management, various macro factors including the soaring number of COVID-19 cases and the uncertainty around the November presidential election were contributing to the dollar’s weakness.

Meltem Demirors, chief strategy officer of CoinShares, believes that periods of economic uncertainty and dollar weakness would likely benefit Bitcoin, like they do gold:

“So where does bitcoin sit in the economic cycle? during periods of economic uncertainty and dollar weakness, #Bitcoin is likely to benefit in the same way as gold. If bitcoin’s financialization continues, it will be unable to remain insulated from the financial system.”

Whether the falling momentum of the dollar has already had its full effect on the price of Bitcoin remains unclear. The U.S. dollar has already dropped to a two-year low, and in the near term, analysts anticipate a dollar recovery.

But two variables that could cause the dollar to drop further are low-interest rates and the European Union’s sizable stimulus package. The euro has outperformed the dollar in recent weeks, as investors found the EU’s 750 billion euro recovery fund compelling. Atop the aggressive fiscal policies of Europe, the U.S. economy’s path to recovery has not been strongly established. Patrik Schowitz, global strategist at JPMorgan Asset Management, noted:

“U.S. economic outperformance relative to the euro area and Japan (no longer) seems guaranteed, at least over the next few years, given the faltering virus response. […] The shrinking of its interest rate advantage makes the USD less appealing and pushes investors to consider deposits in other currencies. These cyclical factors won’t turn around in a hurry and the US dollar likely has room to fall further.”

The fading trend of the dollar coincides with the expectations of higher inflation rates in the intermediate term. If many perceive Bitcoin as a store of value and a potential hedge against inflation, Federal Reserve Chairman Jerome Powell’s upcoming speech could strengthen the image of BTC for the long term.

On Aug. 27, Powell is expected to deliver a speech at a virtual Fed conference and address soft inflation. For now, the markets are not counting on the Fed to lead significant changes on its fiscal policies. As such, even if the Fed says that it might let inflation rates run higher for a while, it might not have a profound effect on BTC.

Possibly due to the falling dollar, gold and Bitcoin have seen a more correlated price cycle in recent months. According to data from Skew, Bitcoin and gold have rallied in tandem since mid-July and have similarly pulled back simultaneously since the first week of August. 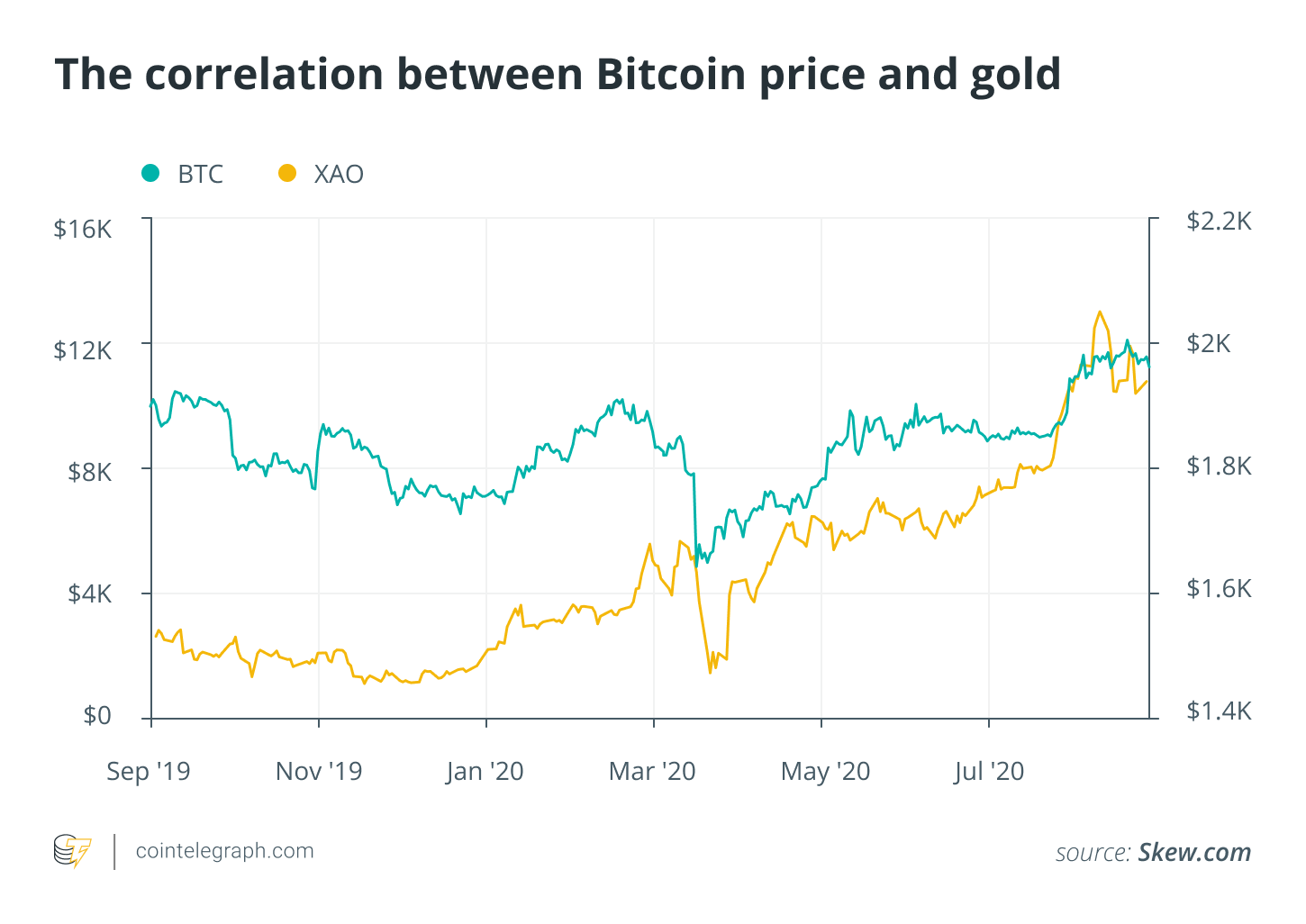 There are several reasons Bitcoin and gold might be seeing similar price movements. First, through growing institutional activity, the public image of BTC as a store of value has strengthened. Investment firms, like Ark Invest, have cited the bulk Bitcoin purchase of $250 million by MicroStrategy as a symbolic strategy that could buoy the sentiment around Bitcoin over the longer term. Second, both Bitcoin and gold seemingly have demonstrated inverse correlation with stocks since the start of August.

The similarities in the price cycles of gold and Bitcoin do not necessarily benefit BTC in the immediate future, but they hint that investors might be considering BTC more as a store of value and a safe-haven asset than as a risk-on asset such as single stocks.

Various on-chain macro metrics suggest that Bitcoin is seeing an extended accumulation phase, where investors are increasingly purchasing BTC with the intent of holding. Grayscale, a cryptocurrency-focused investment firm with $5.9 billion in assets under management, found that the number of BTC held for over a year has increased substantially.

Citing data from Glassnode, cryptocurrency market analysis firm Unfolded said that the number of Bitcoin addresses holding more than $11 million hit a new all-time high. The trend shows that more large-scale investors are accumulating BTC, likely with a longer-term investment thesis and the intent to “HODL.”

Generally, most on-chain data and macro factors point toward a high probability of a Bitcoin bull market entering 2021. In the short term, there are several risks in market structure that could prevent an early breakout. The most prominent roadblock in the short-term price cycle of BTC is likely the heavy $12,000–$13,000 resistance range, which marked the peak of previous attempts to break out of $14,000.

The confluence of the likelihood of Bitcoin to see low volatility in September and October and the repeated rejection of $12,000 could slow the momentum of BTC in the near term. But over the medium term to long term, especially approaching late November to December, there are an abundance of macro factors that could strengthen the case for a Bitcoin price upsurge.

The article is not written by us but taken from a few news sources.