Not so long ago, sandwiched somewhere in between the EU referendum and the coronavirus pandemic, bitcoin and cryptocurrencies briefly became the hottest global topic. With prices soaring, many blindly took a punt, worried they would miss out on a chance for a quick and large profit – the only way was up and all that Yazz.

You heard overheard conversations about buying bitcoin, ripple, ethereum and more everywhere. It seemed everyone was piling in, young and old, with the hopes of turning hundreds or thousands of pounds into something more substantial.

Many subsequently had their fingers burnt – bitcoin prices fell from a peak of nearly $20,000 in December 2017 to $3,000 a year later, others saw their currency vanish, exchanges disappear, or were scammed.

Bitcoin boom? The FCA has provided a snapshot of crypto Britain

A lucky few, likely to have been involved when the price was low and the industry unknown, may have turned a handsome profit. Fast forward to today and while cryptocurrencies remain niche, there is still plenty of interest around bitcoin and the like, with ways to buy it far easier than a few years ago. And for those who managed to buy in at $3,000 a coin in that dip a year after the boom and held on, they would have witnessed the price triple.

We see comments dominated by two extreme camps: those who say bitcoin will race to $100,000, or even a $1million a coin in the next few years, and others saying it is a scam or casino-style gambling, with those getting involved having no idea what it is all about.

The Financial Conduct Authority has taken a keen interest in recent years and this week marked its annual report on the cryptocurrency, to reveal whether the interest in bitcoin has died down or continues to boom.

Who is a typical crypto holder?

Around 1.9 million Britons own cryptocurrencies, according to the new data from the FCA – or nearly 4 per cent of the adult population. These are people who actually ‘own’ a coin in a wallet, not have their money tracking the price. A further 700,000 people have also held crypto at some point, or 5.35 per cent of Britons – up 2.35 percentage points on a year earlier.

That means more than one in 20 Britons have been tempted into dabbling in crypto at some point.

What about the price?

The next most familiar? Libra, which hasn’t launched, followed by bitcoin cash, ether, bitcoin SV and litecoin – these were the only ones with a 10 per cent or more familiarity with the British public. The data, which was gathered in December 2019, also showed that people were far more likely to have heard of cryptocurrency: nearly three quarters are now aware of it, compared to just 42 per cent a year before.

What is the make-up of a typical punter and how much have they gambled of their own cash?

If you bought £260 worth today, and it did – for whatever reason – rise to $100,000 a coin, it would see the value rise to around £3,000 from that initial investment. It is small enough for most to write it off if needed, but big enough to have more than a passing interest.

The most popular reason for consumers buying cryptocurrencies was as ‘as a gamble that could make or lose money’, acknowledging that prices are volatile. There has also been a shifting generational change – just 7 per cent of all crypto holders were 55-plus in 2018. Despite seeing largely as a millennial or generation Z purchsae, this figure has increased to 22 per cent in the new study. 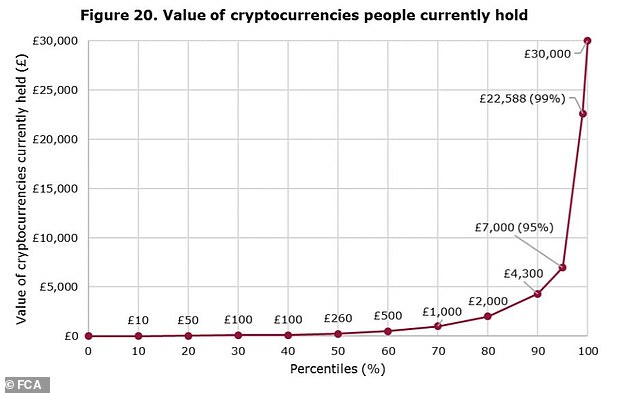 Most consumers seem to understand the risks associated with the lack of protections, the high volatility of the product and have some understanding of the underlying technology, the study says. Nevertheless, the lack of such knowledge among some presents potential consumer harm – 11 per cent of current and previous cryptocurrency owners thought their money was protected.  Again, while the minority, it still amounts to approximately 300,000 adults.

Nearly half of people said they bought crypto as a gamble that could make or lose money. Just 15 per cent expected to make money quickly. A quarter have bought in as a part of a wider investment portfolio, while a similar number said they did as they feared missing the boat.

Meanwhile, 17 per cent said they have got involved as they don’t trust the financial system and the same amount did as part of a long-term savings plan, such as a pension. According to the study, 47 per cent of people have never used cryptocurrency for anything.  This suggests that many are buying it and holding it in the hope of the value growing, not for any practical use. Last month saw the announcement that PayPal will begin supporting bitcoin transactions – which may change all that.

The majority bought their crypto through an online exchange. Of those that used an online exchange, 83 per cent used non-UK based exchanges. While there are plenty of reputable exchanges, as we’ve pointed out before, it can be the Wild West, with people potentially transferring their money overseas.

Are they holding it for the long-term?

In general, cryptocurrency holders expect to hold onto it for long periods of time – again, highlighting that most are now buying and leaving it, in the hope for long-term growth. In the previous study, 35 per cent said they never monitored the value of their crypto holding – however, this has dropped to 12 per cent. Most current owners who have a plan for how long they intend to hold crypto expect to keep them for three years or more.

At the same time, almost 40 per cent said they don’t know for how long they will hold onto it. Google trends data showing searches for bitcoin, with the big spike during the boom

Have more people got involved during lockdown?

It is highly likely that the number of people involved in cryptocurrencies has surged during lockdown, thanks to stock market volatility, savings rates collapsing and having extra cash. There have been plenty of reports suggesting that some households have managed to save extra cash – much of which has poured into savings accounts or National Savings and Investment products.

Some of this would have been diverted into bitcoin. On 11 May, in the midst of lockdown, we also saw bitcoin half – an event that happens every four years. It means the reward for digitally mining Bitcoin has halved from 12.5 coins per block to 6.25, constricting the supply. The event saw some exchanges report an influx of investors, hoping to see prices surge after the event.

According to Google Trends, worldwide searches for bitcoin reached their highest amount since the halcyon days of late 2017 and early 2018, when crypto chat became all the rage.

This suggests that more Britons are likely to have piled in since the data in this report was gathered – but as the study suggests, the majority are wisely not expecting quick gains or sticking too much of their cash in crypto.

If you do buy into bitcoin

Find out how bitcoin and the blockchain works, so that you have some understanding of the system, the ledger, the major players and the public and private key elements. Remember bitcoin yields nothing and its main source of value is scarcity. Most bitcoin activity is trading not investing. Research coin wallets, the digital vaults where cryptocurrency is held, and consider security carefully. Bitcoins have been stolen before, understand how this happened.

The digital currency that most will be familiar with is free from government interference and can be shared instantly online. It doesn’t rely on trusting one central monetary authority. The underlying technology is blockchain, a financial ledger maintained by a network of computers that can track the movement of any asset without the need for a central regulator.

Parts of this article have been taken from This is Money